Hey, there’s a game tomorrow, for those who don’t care or aren’t aware. Uli Stielike’s South Korea will take on Uzbekistan in Daejeon (yay!). What are the purposes of these friendlies? I present my argument for why I think they are still significant if not important. And who are the fringe players to look out for? Will the hyped Lee Jaesung make his first start in the Korean red and blue?

Initial reports indicated that Uli Stielike would be going with a first team of sorts, or at least, for most of the positions.

Kim Jinhyeon gets the start in Daejeon, and Kim Seunggyu starts in Seoul. As this team is a very strong one (ie a first team, save for a couple positions), you can deduce that Stielike has KJH as his number one goalkeeper for now. Although, on the flipside, I’m not sure if this means anything at all.

Leftback may be Yun Sukyoung. Kim Jinsu dropped out due to “injury”, but Park Jooho can play LB for the other game.

The rightback may be Kim Changsoo, and according to Takeuchi, one of our writers here and our J League expert, Kim is getting regular starts for Kashiwa Reysol and is doing well. He even scored a goal in the ACL a couple weeks ago if my memory does not fail me.

Unimportant: if KCS gets a full 90, which I suspect he might, then that probably means that Cha Duri comes off at halftime in Seoul. Jeong Dongho, who plays LB for Ulsan but is a natural RB, might replace him there. Alternatively, JDH could be used a sub, but in my opinion, to give him a fair shout, he should play at least a half.

Defensive mid pairing is Ki-PJH if the reports are true and Stielike doesn’t try a 4-1-4-1 or something. We could be seeing something completely different in Seoul with PJH expected to play LB.

Son on the left, Koo in the hole. Koo still isn’t out of the woods as Korea’s lock for the 10 spot, but it’s not like he has it secured either. Up top will be Lee Junghyub as Ji Dongwon isn’t at 100% fitness, so Stielike wants to give him a few days more training.

Starting on the right wing is expected to be Lee Jaesung. He plays for Jeonbuk Hyundai Motors in the K League and I left him out of my Jeonbuk preview for some silly reason. You watch him in Jeonbuk’s first games of the season and he is sublime. He plays as a CM in a 4-1-4-1 for Jeonbuk. Lee is an excellent passer and has good positional sense – but his biggest quality is creativity. In the first game of the year, Jeonbuk would get into the penalty box with Eninho, Edu and Lee Jaesung combining in passing patterns. Their chemistry was top-notch stuff.

As Jae mentioned on twitter, Lee played on the right wing in the Asian Games, so the winger role isn’t one that is foreign to him. That being said, he is more influential in the middle of the pitch. Hopefully he can give a good account of himself in his first game in a KNT shirt. Lee was rather starstruck with his call-up: “I used to watch Son and Ki on TV, and now they are my teammates.” However, it doesn’t seem that that is affecting his performances in training, as Lee is getting rather rave reviews from the media and people who attended open training day.

RANDOM LINEUP ALERT: Hm, maybe Stielike is willing to experiment more. A new lineup from Naver suggests that Kim Kihee will play rightback, Kim Changsoo switches over to the left, Lee Jaesung starts in the hole with Nam Taehee and Han Kyowon on the wings.

**Lee Junghyub and Kim Jinhyeon should also be in that graphic. Messed up and forgot to add ’em.

Ah, Uzbekistan. It hasn’t really been a while and yet we’re playing you again… I don’t feel there’s much to say, as we played them just a couple months ago in Australia – so I repeat the same general rule about Uzbekistan – they are a very cohesive team with the ball and can create some fair chances. They play in a 4-2-3-1 as well.

3 quick thoughts:  Ignatiy Nesterov, the veteran Uzbek goalkeeper who was superb vs Korea in the Asian Cup was not included in this roster, Qosimov opting instead to turn to fresher talent. Eldorbek Suyunov of Nasaf Qarshi is expected to start instead.

Youngster Igor Sergeev was not named to the Uzbek squad as he is on Olympic qualifying duty.

Uzbekistan will play Japan in Tokyo on Tuesday to finish up the international break.

Many are criticizing the KFA for not going and finding a friendly opponent such as Germany or Chile, and say that because of this, these friendlies are therefore a waste of time. In my opinion, this is false. The goal of the friendlies seem to be to team-build. Stielike seems to want the players to just enjoy international break, to give a positive atmosphere after a chaotic Asian Cup. Why put the players through the stress of international opponents off the back of a difficult Asian Cup run and before a new World Cup Qualifying cycle? Why risk damaging this team’s resilience and spirit by testing pieces and fringe players against world class opponents?

Secondly, these friendlies, although the scoreline may matter little to many of us, are important to keep general public sentiment in Stielike’s favor. We keep on winning, fans are more engaged. The Asian Cup worked wonders in terms of rekindling the nation’s interest for football – the proof is in the attendance numbers of the K League, one of the league’s best starts attendance-wise in a fair few years. A positive performance in these friendlies continues this momentum.

Another argument to the irrelevance and unimportance of these friendlies is that Stielike has not called up enough K League/J League debutants/fringe players, and should not have dragged Ki or Son halfway across the world to play for their country.

This is also an opinion I do not agree with. Let’s have the team here, team-build in a less stressful environment than the Asian Cup. Let’s have them continue to build chemistry and understanding on and off the pitch.

Also, we do have a few intriguing new faces in the lineup. Lee Jaesung, Jeonbuk’s playmaking talent, Kim Eunsun, a solid defensive midfielder for Suwon, Kim Kihee, a centerback who Stielike has worked with but now might get a shot as a fullback. Not enough domestic players? There’s the EAFF Cup for that. Not enough experimentation? Better to experiment a couple things at a time than do everything at once. Plus, we have the possibility of drawing, you know, Bhutan and India and stuff in our 2nd round qualifying group? I don’t know, maybe we can sort of experiment there?

International breaks are few and far between this year, and this is the only one where we can play friendlies. Let the players enjoy it, give us their all, perform positively and give the fans a spectacle. Let’s continue positive momentum and atmosphere with our KNT with these games. 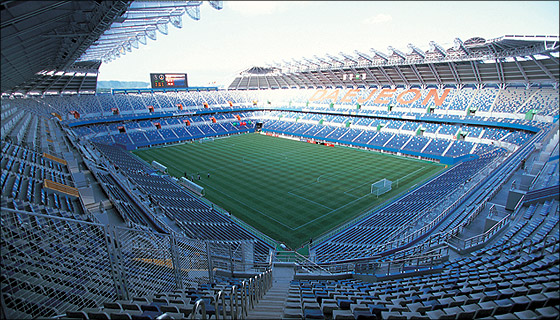 (Unimportant personal story – I used to see the WC Stadium every day growing up in Korea. What a beautiful stadium. I hope to see it again – and hopefully catch a match – next time I’m in the fatherland.)

Time for some shut-eye (to sleep and to manage yet another wave of eye pain… we may not pay for healthcare in Canada, but we have to wait a bloody long time to get some…). If I can wake up and find a stream, I will be watching Korea U22 vs Brunei U22 in the 2015 AFC U22 Cup Qualifying. Yes, I am crazy.

Korea must win their group of Brunei, Timor-Leste and Indonesia, or finish runners-up and eek through with goal differential vs other groups. After which, they need to finish in the top 3 spots in the tournament proper. The road to Rio begins now!

In any case, jalgayo from the TSQ and see you (over on twitter @korfan12) in a few.

EDIT: I’d be remiss not to mention this is – I believe – the first KNT game in Daejeon since THAT header by Ahn Junghwan in 2002. Expect a big turnout.

And also, there will be a pre-game ceremony for Lee Gwangjong, Asian Games-winning manager. You’ll recall that he was diagnosed with acute leukemia earlier this year. I know that we are all hoping for his quick recovery. Thoughts and prayers remain with his family, and hopefully he can occupy a KNT youth team managerial position again sometime soon.