There are several incredible moments frozen in time: the image of Son’s face as jubilance at seeing the ball go in the net turned to anguish and pain as he collapsed in the 119th minute…

Before we go further, it’s 5:50 am here at the physical Tavern so this is going to be a flittering reel of observations / thoughts / tweet recollections and points to take away from this quarterfinal. Here we go:

Uzbekistan’s coach Mirjalol Qosimov made a bold prediction – that he and his side will beat Korea. Uli doesn’t bite. Instead Son Heung-min gets out in front and sends a special message to Taeguk Warrior supporters via youtube in which he asks people not to be overly be critical and nitpicky (hello? netizens?).

Despite winning Group A, Korea’s lineup had been battered by some key injuries: both Lee Chung-yong and Koo Ja-Cheol out was a big blow to the teams hopes of going deep into the tourney.  With Iran possibly looming in the semis, should Stielike rest players like captain Ki? Would Kim Ju-Young recover in time to be paired with either Kwak or Kim Young-Gwon as the CB pair in the back?  Cha back at right back?  The starting lineup please:

Similar to the last starting XI vs Australia, no Cha, but Nam Tae-hee in the middle. Ok, carry on.

6′ Lutfulla Turaev’s header is juuuuuust short and it goes out of bounds. Uzbekistan not wilting against the Koreans! #KORvUZB #AC2015

That early scare gives an idea of how Korea was operating from the onset, under pressure from Uzbekistan. But they couldn’t sustain the pace and Korea managed to settle things.  As the game muddled on, it seemed for every time Korea would build an attack that would fail, Uzbekistan was ready to pounce on the counter, looking more or less dangerous each time. It’s at this point in the match that things got a bit crazy.

19′ Lee Keun-ho on the counter attack has a chance for Korea Republic. All action now! #KORvUZB #AC2015

End to end stuff. Both ‘keepers making big saves. Korea coming back into it. & Son heung-min starting to get into a groove — John Duerden (@JohnnyDuerden) January 22, 2015

We’ll exit the twittersphere for a moment – a number of great chances for either side, with the goalkeepers the reason things were still nil-nil – it was thrilling AND incredibly frustrating to witness simultaneously. We reach HT, scoreless. Son, who was a bit anonymous at the start, towards the end of the half was as Duerden put it, starting to get into a groove (listening to some old school Madge are we?) Meanwhile Lee Jung-Hyub, on getting serviced by Son, was nearly one on one with the keeper, but his shot was incredibly wide of the target.  This might’ve been the reason Ki started coming up further to shoot.   2nd half, Korea had the better of the two sides with utterly dead on chances to go ahead.

How did that not go in????!!!! Ki’s FK and LJH on target header saved, then KJH gets adventurous, nearly costly mistake

51′ Down the other end and Kim Jin-hyeon clears into his defender and almost an own goal. Great action early! #KORvUZB #AC2015 — AFC Asian Cup (@afcasiancup) January 22, 2015

In the 65th minute, Korea with a near setpiece defending catastrophe averted when Nasimov connects but misses at the back post. 12 minutes later, again problems:

78′ Rashidov with a delightful back post ball but Turaev can’t bury the free header. What a chance! #KORvUZB #AC2015 pic.twitter.com/gW95utPxwv

Lee Keun Ho gets the ball inside the box, one on one with the keeper but misses everything. #AC2015 #KORvUZB — Asian Football Feast (@AsianFballFeast) January 22, 2015

Nam Tae-hee will probably rather forget this:

It’s now the first deadlocked game after 90 minutes in the tourney, and the first goal-less game as well. But it is here, in the agony of extra time that Korea reached deep within and found their inner Taeguk Warrior, summoned just for the occasion.  We go to just before the extra time break, Hoffenheim man Kim Jin-Su pries the ball away from an Uzbek player deep in their half, then quickly crosses to Son: Magic. But there was still 15 minutes to go. Tenseness in the Korea camp as Uzbekistan pressed for an equalizer.  Each time Korea cleared it, Uli Stielike kept waving his hands, signaling his players to not park the bus but to press onward.  The tired squad considered doing so. Finally in the 119th minute, Cha Du-Ri went ahead and launched a counter, drove heroically down the right flank, exposing the defense who were busy in Korea’s half.  Cha kept going. Then old man Cha shifted into another gear, outran the first defender, nutmegged a 2nd before finding Son approaching the edge of the box. Defenders who were supposed to mark him, instead rushed to cover an onrushing Cha.  The son of legend Cha Bum-Kun brilliantly laid it off for ‘Sonaldo’. A few tense miliseconds for him to settle the ball and BOOM – he blasted the shot center high, past the keeper and on into the net. Magic x2. Game over. Check out Cha’s run and Son’s goal:

To that moment I wrote earlier about frozen in time, you can see from the replay Son’s joy upon realizing that it’s going in -turning to pain and agony as he collapses in slow motion.  He was stretchered off, but came limping back in before the game was over. Here’s what happened before the final whistle:

Here’s what we can take away from this match:

Just got a tweet, video highlight reel from the AFC:

Here are your final game stats, courtesy of the AFC (first stat sheet is after 90 minutes, followed by extra time) 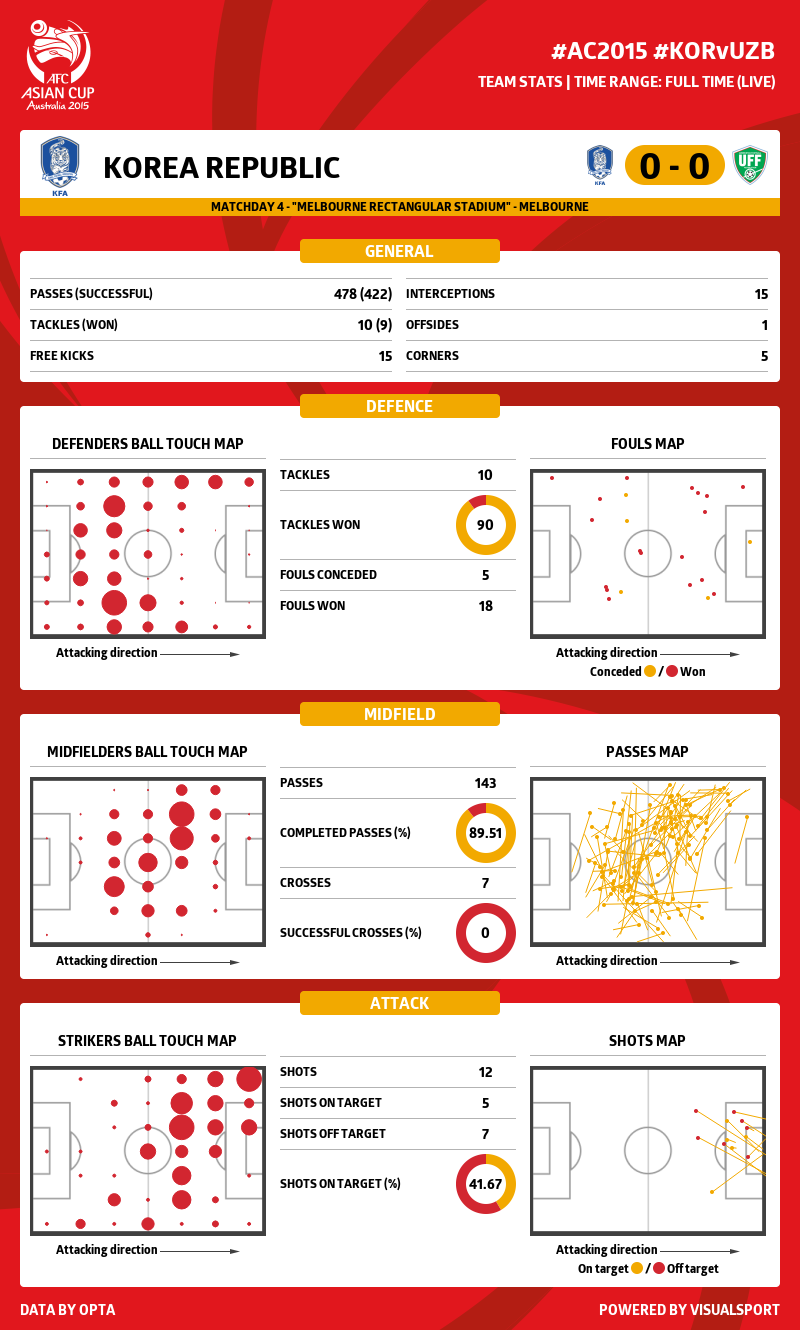 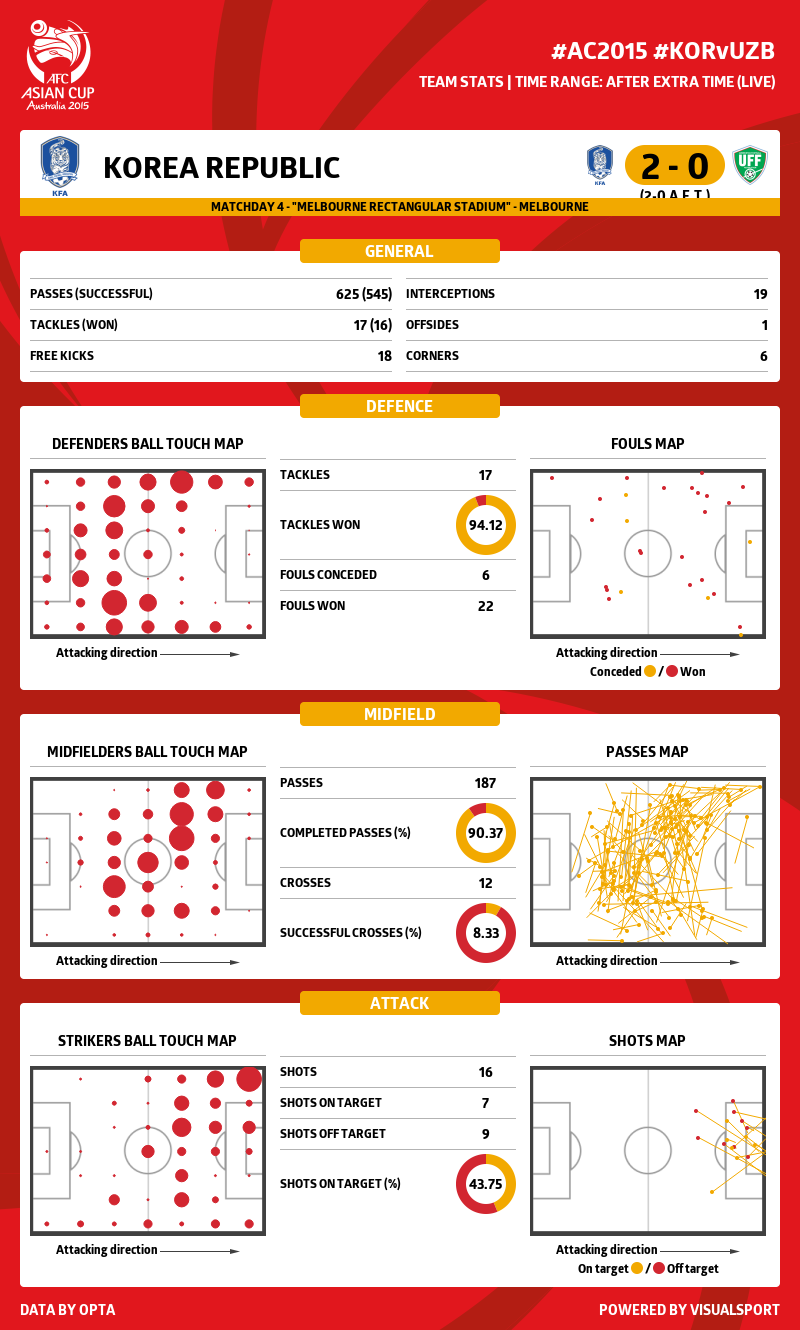 Kwak Tae-Hwi was somehow named Man of the Match today by tournament officials. By what committee?  Not to denigrate Kwak, he didn’t have a terrible game per se, but really? Moving on…

About to close up the Tavern…but wait, it’s morning time…guess we’ll open the Tavern again. What are your thoughts on the game?  How should Uli try to organize the lineup in preparation for the semifinal – which by the way will be…