It was a matter of when. The first defeat against Qatar in 32 years finally triggered the sacking and the German was dismissed from Korean football this past June. The 3:2 loss in Doha meant Korea conceded more than 2 goals in 3 games and, for the first time, lost 3 games in the final qualification round and failed to win a single away game. Wins were unconvincing, draws were frustrating, losses were humiliating; Uli Stielike ’s KNT (Korea National Team) was far below expectations on the pitch. Off the pitch, he spoke of controversial claims that exacerbated his relationships with players, coaching staff, fans, the KFA (Korea Football Association), and even the media. After 33 months in charge, more than any previous KNT manager, his contract was terminated. Yet Korean football fans’ anger and skepticism has grown bigger than ever before. Demonstrations against KFA resulted in personnel change in the administration office. And today, the KFA and the KNT sit under immense pressure from the critics. Despite qualifying for the 2018 Russia World Cup, too many fans have lost their trust in the team to perform in Russia. After poor preparation that led to shocking results in the 2014 Brazil WC, the KFA went ahead wasting another 4 years of time. Here, we reveal what to take away from Uli Stielike’s failure.

There were questions as to if he was ever competent for the position. His failure with the KNT makes sense after all, given his mediocre coaching career: short spells in Switzerland, Spain, and Ivory Coast. His teams remained fruitless and tedious. He was far from winning trophies or playing attractive football. His coaching capabilities certainly weren’t the reason why he was hired. What did Lee Yong Soo, then the Technical Director of KFA, see in the German coach that gave him the final nod? It was his time spent with the golden generation of German players that won the 2014 Brazil WC. In the early 2000’s when German national team faced its own dark age, Stielike worked with different youth teams for six years and oversaw young German players that went on to impress in the WC a decade later. For this specific reason, Lee Yong Soo chose Stielike and expected him to not just take Korea to Russia but to develop a team that could leave behind a legacy in Korean football. It made absolutely no sense. Who hires a mediocre coach to lead the national team and ask to develop the youth system? This was the start of mass chaos.

The KNT cruised through the 2nd round of qualification scoring 27 goals, winning all 8 games, and keeping all 8 clean sheets. But the quality of play against the very weak sides – Kuwait, Laos, Myanmar, and Lebanon – was seriously concerning. Seeing every game as a build up to Russia WC 2018, the KNT was expected to put pieces together and outperform these teams. But the German and his men never managed to reach that point. Players seemed disconnected, they looked as though they were playing together for the first time. Meaningless possession around the back served no purpose and KNT relied heavily on set pieces to win games.

For strange and frustrating reasons, poor performance against the weak sides never caught the full attention of KFA and KNT coaching staff. The very first punch on the face was facing the mighty Spain that ended in a thumping 6:1 defeat. Moving on to the final round of qualification, Korea was not ready to take on teams who were prepared to penalize Korea’s innumerable weak spots and mistakes. Opponents threatened each game and playing in the WC in Russia was in serious doubt. Defensive issues lingered on. Players were playing out of position. No sign of team spirit or color or unity was visible from the Stielike team. Then there was the outrageous ‘Soria incident’, complaining that the loss in Iran with zero shots attempted was due to lack of players like Sebastian Soria, an Uruguayan forward playing for Al-Rayyan, and ultimately blamed Korea’s youth system, saying it was fundamentally weak. This caused an uproar in the media and fans reacted immediately. He also no longer had control over the dressing room. Watching long videos of John Cryuff during tactical sessions, players no longer had faith in their coach. As a ‘video analyst’ Cha Du-Ri joined in, but he was really invited to reconnect the dressing room to the manager. Sadly, the damage was too large to rebuild the bridge. From disappointing results to irresponsible player management, Uli Stielike drove KNT through one of the worst times in Korean football history.

Simply put, the head coach position is for a candidate with the strongest credentials with proven qualities of coaching. He must be a man on a mission to produce the results. It was never a position to worry about a nation’s football development and it will never will be. When Stielike needed to figure a way out of the current problems on the pitch, he was busy traveling around Korea giving his opinions on the youth system. It is quite a disappointment that KFA took four years to understand that the head coach position is for a candidate with successful experience and competent coaching capabilities. Carlos Queiroz of Iran football is a great example. First off, Queiroz was already a recognized coach, lauded by top managers around the world, including his former boss, Sir Alex Ferguson. He also had the character to fight against the Iran Football Federation. He was a man who did not allow anything to hinder his team from achieving success. Iran, ranked highest amongst Asian teams according to FIFA, has constructed a golden generation of their own by building the team around talented half-Iranese in Europe and successfully qualified for the Russia WC with great potential as a dark horse. Now there’s a strong belief in Iran football that Iran will remain strong even if Queiroz leaves in near future. This is the legacy that a head coach should leave behind, stimulating progress even after a leader steps down, this not only creates leadership continuity, but also growth continuity in the system. Fans never wanted Stielike to leave a legacy on strong youth system reformation.

In chaos and trepidation, coach Shin Tae Yong stepped in and was asked to revive the team and scrap a ticket to the WC. Since the summer of 2010, Korea has pointlessly appointed Korean managers, throwing them into a pit and asking them to find a way out. Players and coaches alike are valuable assets of Korean football. The KFA must avoid using Korean coaches in a panic. And most importantly, it cannot hire coaches like Stielieve ever again. Hiring he head coach should never be done on a short-term basis. It needs to learn from the JFA (Japan Football Association) when selecting a manager. It first filters out 3 to 4 coaches who best fit into their requirements. Then they take three to four years to build enough rapport with each of the nominees to minimize the possibility of a failure. Can KFA learn from the neighboring nation? Coach Shin Tae-yong has been impressive so far, but we cannot have another talented coach like Hong Myung Bo give up on a coaching career. 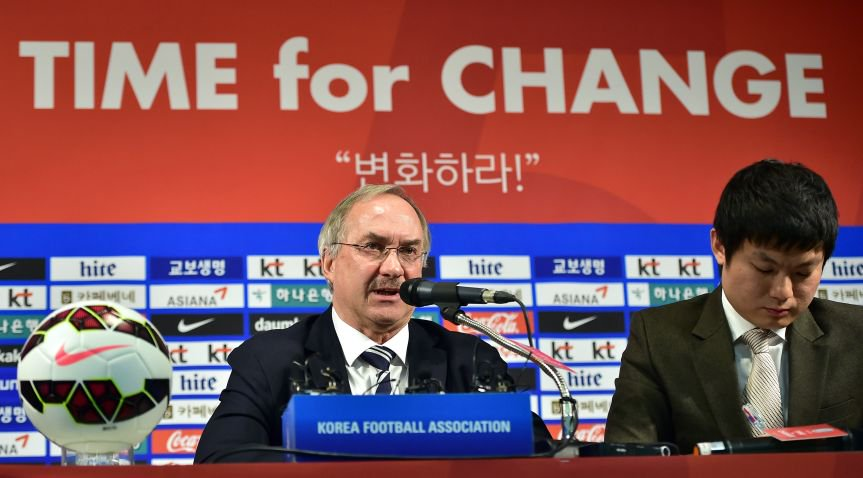 It takes me back to the unsavory ‘toffees incident’ on return home from Brazil in 2014. Uli Stielike was appointed as the next manager to lead the change in Korean football. ‘TIME FOR CHANGE’ KFA and Stielike shouted, but three fruitless years report to us that there was no change, but a greater setback, deteriorating even further behind. Hiring Stielike was a complete mistake. Even when he was on board, problems were never dealt in right manners, timing to bring in a new manager was missed, and KNT was very poorly managed. This is what happens when you don’t have a plan, a road map, for your team and what’s worse when you don’t bring in the right personnel.

Let’s finish with what Uli Stielike thought about his failure in Korea. Speaking to Dong-A Daily News, Stielike said Korean football’s biggest problem is that the KFA has no clear plan for the future and added that the organization only suffers when faced with unexpected difficulties because of poor leadership and management. Elaborating on the lack of goals and vision, he said there is no long-term plan, instead the picture KFA has contains only the next 2 games or the next 2 months. This is the kind of environment the KFA is creating for their national team coaching staff. Germany changed 3 managers in 20 years when Korea changed 3 managers in just 4 years. Uli Stielike’s departure this June remains as a reminder that KFA are laying their own grounds for failure.