There were 2 Asian Champions League games this morning at the Tavern and I missed it -Damn!  Oh well, we’ll make it up with all the good info you need to stay on top of the other games featuring Korean ballers this midweek… + 2002 World Cup legend Seol Ki-Hyeon retires.

First we’d be remiss not to include the 2 ACL results just in :

First ACL group win for Seongnam, PK by Ricardo Bueno and 2nd half they doubled it with Hwang Ui-jo’s goal -a really nice move cutting inside before the finish.  Osaka featured fullback Oh Jae-Suk. Game recap here. Game was marred by some racist chanting by frustrated Gamba Osaka supporters. Not a bad turnout, 7000+ in attendance. Let’s see if that # can rise.

Comfortable ACL win for Jeonbuk, also getting their first group win. Jeonbuk was frustrated 2 days ago, refusing to practice on a shoddy pitch provided by Shandong. They took it out on their hosts with a multi-goal win. From the AFC: “Han Kyo-won, Lee Jae-sung and Leonardo scored in the final 20 minutes of the second half at Jinan Olympic Sports Centre after Edu’s audacious first half chip had handed 2006 winners Jeonbuk the lead.”

2 wins this week so far in the ACL for K-League teams, will Korean squads make it 4 for 4?

The very prodigious Tim Lee wrote up a preview for these upcoming ACL matches:

Suwon go to Beijing Guoan. Suwon acquitted themselves nicely against Urawa last Wednesday, and Jong Tae-Se looked dialed in (at least a little) for a change. Beijing Guoan were three points off from upsetting Guangzhou Evergrande for the Chinese title last year, and come back from Australia (against Brisbane) with a 1-0 win.
The Verdict: Beijing could be a handful for Suwon, especially in their own backyard. But I’ll be the optimist for a change. 1-1 draw. (EDIT: Beijing are missing 4 of their best players, which could sway things in Suwon’s favour.)
Koreans Abroad: Ha Dae-Sung dons the green of Beijing Guoan, but he is injured. However, there is still a Korean connection – Dejan Damjanovic, longtime FC Seoul striker, plies his trade for Beijing.
Seoul’s new “attacking football” brand wasn’t exactly on full display last week against Guangzhou Evergrande. However, they did manage to not concede in open play against the Chinese titans. In this light, it was disappointing for them to concede a cheap corner kick goal due to some awful set-piece defending. They host Kashima Antlers, who suffered defeat against Western Sydney 1-3 last Wednesday.
The Verdict: There doesn’t seem to be much to seperate these two sides. 1-1 draw.
Koreans Abroad: Hwang Seok-Ho represents the Kashima Antlers. Look for him in the #14 shirt.

We’ll update on the status of Koreans in other ACL teams later…but I can report Kim Chang-Soo scored for Kashiwa, they win 5-1 over Vietnam’s Binh Duong. Also Park Jong-Woo and Jang Hyun-Soo were part of a losing effort for Guangzhou R&F, they lose to Buriram United 1-2.

On to Europe and for midweek listings, we go to Korean Footballers Abroad:

Tavern Owner is on the run but let’s update you good people with a few interesting tweets to start off the Kickaround. I will try to update later in the day, but juggling b/w family stuff…

A Source captured #Gamba fans throwing bottles to their own players and shouting “Fucking Korea” to other spectators. #ACL2015 #SEGvGAM

All love for the K-League, the season gets underway this Saturday. More on that later in the post, but KNT coach Uli will be showing up and scanning for other ‘Lee Jung-hyups.’

Stielike will attend the K League opener between Jeonbuk and Seongnam. It’s said that he will be looking closely for a diamond in the rough.

Slightly old news but still interesting, following up a report that City Group (associated with Manchester City) are interested in partnering with a Korean company for a stake operating a K-League club:

Last thoughts: I was going to give a rousing Tavern speech on why people who may have overlooked the K-League should tune in this season, but I’m running short on time (that and I’m about to play in a indoor soccer match – wish me good luck – I’ve been trying to score more but managed 4 assists and 1 goal in 10 games with players a decade younger than me. Trying to disprove the adage that you can’t teach an old tavern owner new soccer tricks). So I’ll try to make my case for the K-League later in the week. On a similar sounding note, I do plan on -for the first time ever – go see my local soccer team, DC United. The MLS season, like the K-League season, starts on Saturday March 7th (not counting the CONCACAF Champions League). I’m excited as I’m taking my 6 year old (leaving the 2 year old with halmonee & haraboji). I guess it’s an extension of that phrase: Think Globally / Act Locally.

Meanwhile, do check out Tim’s impressive K-League preview series.  Everything you need to know about each club before the 2015 season kicks off, and it looks like he has Jeonbuk‘s up right now.  and just like that I got a twitter update from @junhosix after reading the Jeonbuk preview: turns out Choi Kang-hee was a player for the legend Cha Bum-Kun, played one season under Cha at Ulsan before he retired and hung up his boots.

>>Tim jumping in, and very rudely so: I was going to make a new post for this, but then I’d be swamping this post further, so I figured I’d just post it here. 2002 World Cup legend (everyone on that team is some sort of “legend”) Seol Ki-Hyeon has called it quits.

It’s getting late at the Tavern (well, for me), so I’ll jog your memory a bit. Nostalgia, anyone (2 minute mark):

Yes, the man who scored the tying goal against Italy in 2002. The first ever Korean to score in the UEFA Champions League. Ex-Wolves, Reading, Fulham, Royal Antwerp and Anderlecht man. The winger/striker from Gangwon-do. The Incheon United stalwart for the last 3 seasons. 36 year old Seol Ki-Hyeon has announced his retirement from professional football.

Now, the timing for his retirement is a bit odd, as he was slated to represent Incheon United again this season. However, he has been plagued with back problems and Sungkyungkwan University (weirdly, I read about them a couple days ago because they’ve got Yeungnam University, last year’s cinderella FA Cup team, in their first game in the FA Cup) made Seol an offer he couldn’t resist to take over as interim manager (interim because he doesn’t have the necessary coaching license yet).

“Today, I have a similar feeling like I did when I moved to Europe as a footballer. It’s mixed of fear and anticipation. As a coach, I know that I have even more to learn and to do than as a player. I start my coaching career at University, but my goal is to go higher.”

Good luck to Seol Ki-Hyeon in the future. Perhaps he will once again represent the Korean National Teams, but in a coaching capacity. And thanks for everything. Gamsahapnida. 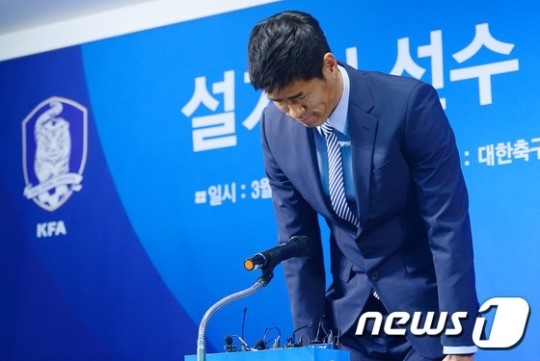