(TV coverage reflects US)
Kwon Chang Hoon — I don’t expect any major changes to his situation this weekend. Coming into the game will depend on circumstances but I don’t expect him to start. Hopefully he gets on and has more confidence to play better.

Ji Dong Won — Schmid and Bobadilla are injured so Ji may be forced back into the XI. He’s been playing poorly over past couple matches so we’ll see if he finds some confidence despite having to fill in lots of positions.

Koo Ja Cheol — Koo should start in an important match to get things going again for Augsburg and rebuild their buffer down to the relegation spots. We will see which position he’ll line up at though, if CAM, CM or RM.

Lee Chung Yong — We’ll see if Allardyce has re-arranged things with an extended break to get things fixed. I suspect he’ll be lucky to make the bench.

Ki Sung Yueng — Clement said that this weekend is too soon for Ki. I had some hope seeing Ki’s post of himself in the gym, but I guess still a bit away.

Son Heung Min — As Tottenham switched to back 3/5, Son was pushed to the bench. Unfortunately, Tottenham still had a defensive failure resulting in them needing two goals and then Alli got sent off. Son came in and did enough to open the match back up, creating some width on the left and attacking the Gent defenders well. But Gent iced things later with a goal. Son did have one great chance to at least revive a glimmer of hope, but he shot over despite having tons of space and only GK to beat. Tottenham looked ok with 5 in the back, so perhaps Son stays on the bench this weekend, but if they go to back 4, Son will probably start on the left. 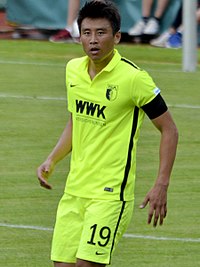 More after the break…

Asian Champions League Group stage started this week (apologies for not listing those on Sunday) and thus far, the 4 K-League teams went like this: 3 losses , 1 draw

Note: Hulk scored the only goal that proved the difference maker for Shanghai. In this instance, one can make a case that Chinese spending has paid off. We’ll see how long Hulk decides to stick around the CSL.

It’s only the first group game, but since forever, K-League teams usually does well in the ACL.  Interestingly, the narrative has been that as good as JLeague clubs are, for some reason they’ve traditionally underperformed in the ACL.  After this round 1, JLeague clubs have gone 3 wins/1 draw.

One more thing to note: no goals scored by any K-Leaguers in this round. Suwon’s goal was an own goal.

Extra time: Koo Ja-Cheol is waiting for his agent to arrive from Asia to negotiate a contract extension with Augsburg. Augsburg seems keen on keeping Koo for several more seasons.

Meanwhile, Lee Kang-In, a Valencia academy player that’s on the radar for scouts and KPA watchers alike, was rumored to have been sought after by Real Madrid. Seems like there’s traction to those rumors.  Hard to predict at this moment of time, however should this transfer happen, there’s pros and cons to the hypothetical move: would it benefit Lee’s potential football career or conversely set him back?  Real Madrid doesn’t have an established track record for promoting youth players from it’s system. That could change given that it’s former academy coach is now it’s senior manager in Zinedine Zidane.  Nevertheless, there’s the old adage: cream rises to the top no matter what.

I’ve got a interesting article to relay soon on the effects of multizone long distance air travel and a longitudinal study on the performance on athletes. It affects Asian based European players when they get called up to national team duty. Stay tuned for that.  Stay safe out there. Peace, love and resistance. Chal-ga