First of all let’s open with a quick update. Yesterday the draw for the FIFA U17 World Cup this October (held in Chile) came out, and we got grouped in Group B with Brazil England and Guinea. It’s certainly one of the two hardest groups, the other being the group of Germany Argentina Australia and Mexico.

We lost to Brazil 3-0 in a practice match a while back (without LSW/JGH), and drew England 1-1 in the Montaigu tournament with LSW scoring a solo goal, but that England squad and the current England U17 squad are apparently gonna be completely different. Sure it’s a very hard group but I guess this will be LSW’s ultimate test so far.

He doesn’t 뻥축구… The point I am trying to make is this – in a time when Korea offers a legitimate threat when keeping the ball on the fucking ground, why long ball? I get that this was a test match, but we cannot afford to take this approach anytime in the near future. Japan was wrecked by North Korea in their previous match because the Norks actually used a target man efficiently. It’s been quite evident for years that South Korea is not able to do this, and therefore, and especially when there are better options available, let’s not attempt to play 뻥축구 again.

Surely this wasn’t the best time to bring out 뻥축구 and it’s not something we need vs Asian opponents but when things don’t go well and 뻥축구 is our only option we need that plan B don’t we? Cuz other than 뻥축구 we don’t have one.

We sucked at making KSW the target man because even though KMW and LYJ practiced crossing to KSW all day they still sucked even harder than I would have had I been there (and I can’t play soccer to save my life but at least I know how to aim crosses). He had shitty service, sure, but he also didn’t play too well. Which made me think… WE HAVE OTHER OPTIONS! Who do we play as the target man if KSW keeps sucking and we are forced to resort to a Plan B? 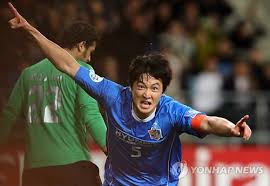 KTH has time and time again proved his aerial dominance and it’s certainly something KSW hasn’t shown as of late.

And perhaps in the future we can rely on a Plan B4 where we pass to Lee Seung woo and hope for the best.

P.S. to be completely serious though I recommend calling up Suk Hyun Jun, let’s see what he offers.